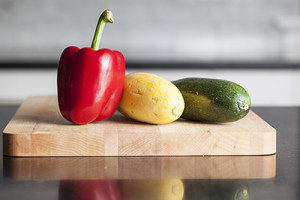 Poor coconut oil. Taken down off its pedestal. It must feel very badly about itself knowing, again, for a fact, it’s a saturated fat.

If you followed the science you knew this! I’m just SMH (shaking my head), a lot, because most consumers will say they feel like the science has changed on them, yet again. The thing is, it hasn’t.

I was in touch with a fellow colleague Kevin Klatt, PhD Candidate at Cornell University in molecular nutrition and RDN to be, who clarifies the coconut oil ‘news’ for us:

“I think there’s so little evidence on it that we can’t say too much. Based on its effects on LDL and the whole body of evidence, I think the guidelines pretty much state that it should be used sparingly relative to other cooking oils, such as extra virgin olive oil and canola oils.

Individuals at high risk of cardiovascular disease should stick to their medically advised diets, which if they’re following the AHA/ACC 2013 guidelines, coconut oil wouldn’t be used regularly. That all said, coconut oil has it places in certain cuisines and recipes and shouldn’t be looked at as ‘toxic’.

I think RDNs can still counsel patients to use it occasionally with their patient/clients’ favorite dishes, while still focusing their overall dietary fat intake on nuts/seeds, extra virgin olive oil, canola, etc. I personally err on not saying much about coconut oil, and would advise individuals that it raises LDL and HDL but we don’t know much about its impact on cardiovascular disease risk beyond that.”

Further, here are two articles on this to help you understand the facts – including one written by Kevin who was quoted above.

Give that bottle of coconut oil a hug and put it back in your collection of oils for cooking or baking (use sparingly especially if you have a history of heart disease). I’m going to use this word, again, MODERATION. (Which is why I gave coconut oil the morsel section.)